The German author Theodor Fontane once wrote that "Imitation is the sincerest form of flattery." However, you can do without this type of flattery if it harms your health. Trademarked goods such as watches and clothes are recognized all over the world and have become coveted objects; they attract the attention of unscrupulous counterfeiters everywhere. Increasingly, this is also becoming true for drugs.

Counterfeiting drugs and knowingly offering them for sale has now evolved into a serious problem for world health.

Lack of proper controls, the understandable reticence of the manufacturers affected and the fact that drug counterfeiting has now become part of organized crime, suggests that we do not know the real scale of the problem.

No one would argue that drugs do not play an important role in healthcare: they prevent premature death, accelerate healing and alleviate the symptoms of those diseases that cannot yet be cured. This makes drug counterfeiting all the more reprehensible since it can be the cause of suffering or death.

These examples show that the shortage of drugs that is still a reality in many countries is being unscrupulously taken advantage of.

For the years 1982 through 1997, the World Health Organization (WHO) identified and documented more than 770 instances of drug counterfeiting. Over 50% of these cases concerned the period after 1993  and show an increasing tendency. Almost 70% of the counterfeiting cases were discovered in developing countries, in particular Africa. Over a third of all cases involved counterfeit antibiotics - the group of drugs most likely to be counterfeited. Roughly 60 percent of the counterfeits documented by the WHO did not contain any active ingredient at all, 19 percent contained a wrong dosage and 16 percent completely inappropriate agents. Only a minor portion of the documented counterfeits contained the same quality and quantity of agents as their authentic counterparts.

The peoples of Africa, Asia and South America are
particularly affected by drug counterfeiting.

"All you need to counterfeit drugs is a person with access to a small laboratory, a propensity for theft and a total disregard of human dignity."
(Milton Silverman, University of San Francisco)

Medicine counterfeiting - Only a problem of developing countries?

In the industrialized countries, drug-legislation regulations and monitoring controls, the efficient exchange of information and the close co-operation between manufacturers, pharmaceutical wholesalers, pharmacies and authorities ensure a high degree of drug safety. In developing countries, however, the basic prerequisites for an effective drug control are often completely lacking:

In addition, the borders are more often than not poorly guarded so that drugs can be placed on the market without undergoing proper control. 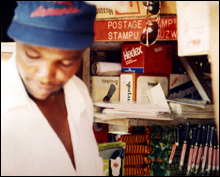 However, drug counterfeiting is not just a problem of developing countries. Even in Europe and North America, the WHO reports an increasing trend in drug counterfeiting. Example: in the USA, 1.5 million oral contraceptives were seized and found to contain an insufficient dosage; in British health clubs, unauthorized injection dosages of muscle-building drugs were discovered.

"As long as the pill is the same size and colour as the original product, doctors and pharmacists - never mind patients - cannot tell it is a counterfeit."
(Richard Arnold, IFPMA)

Even in Germany, patients cannot feel completely safe from counterfeited drugs, since underdosed drugs have already been shipped through German free ports, counterfeited drugs were found in German pharmacies and a ring of anabolics counterfeiters acting from Lower Bavaria was cracked down on.

All responsible national and international bodies and institutions are being called upon to further develop the stringent drug-control regulations of the industrialized countries and to help developing countries in setting up an effective basic control system.